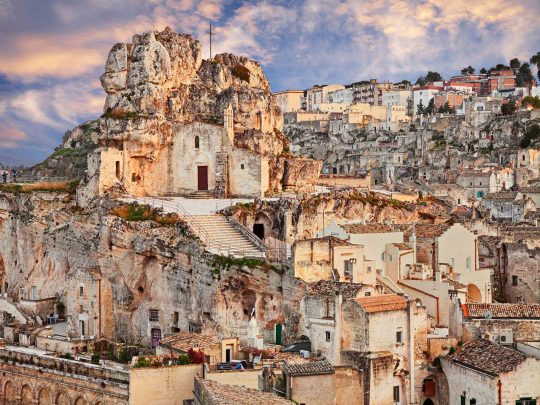 Matera is getting very popular lately, I think it’s because a famous movie they made and people started to wonder where that awesome place was.

This city is called “La Città Dei Sassi” (The City Of The Stones), in fact here you will find some of the most beautiful houses that are built on top of stones.

This city deserves to be visited in a few days or more, there is a lot of stuff o see and also it is not super simple t walk around, you will need to have comfortable shoes.

The city is all built on top of carved tuff and it continues to leave visitors speechless that are going to visit this town all year long.

Matera What To Do

Matera is inhabited since the paleolithic in fact there is people saying that this was one o the first cities that had humans in Europe even before Europe was formed.

We want to start our tour from I Sassi di Matera,  built in the tuff rock on the side of the Gravina valley, in 1993 it was declared a UNESCO World Heritage Site.

The particular weaving of caves used as dwellings, winding alleys, rock churches, terraces, gardens, underground passages makes the Sassi a spectacular example of architectural complex perfectly adapted to the natural context and you must see this once in life.

La Cattedrale di Matera offers a splendid view of the Sasso Barisano. The construction dating back to the 13th century stands on the remains of the ancient Benedictine monastery of Sant Eustachio.

Le Chiese Rupestre di Matera is a beautiful example of places carved in the rocks, the churches with their architectural and pictorial decorations represent exceptional artistic works, expression, among the most significant, of the historical heritage of the city.

The long Palombaro is the large cistern excavated under the central Piazza Vittorio used until the first decades of the last century for the collection of drinking water.

The nature reserves and the parks, the protected oases that characterize the entire territory of Basilicata are a characteristic intertwining of nature and culture.

There are many places where you can hang out in nature and have a lot of fun taking pictures of awesome landscapes and things.

The region Basilicata is great if you are looking for great food, in fact here you will find a lot of restaurants that are pretty cheap.

There are many dishes worth to be eaten but I want to talk about the Cialledda which is stale bread with tomato, cucumber, peppers, potatoes, oil, and onion.

The former are often based on fresh homemade pasta such as lagane, cavatelli or strascinati and you will love to eat this food for sure.

Orecchiette funghi e salsiccia is another pasta dish that you will like a lot, this kind of pasta is served with mushrooms and sausage meat.

If you are looking for the best places to eat in Italy, you should visit Matera and go to a trattoria or restaurants in the city center.

Try to avoid the most crowded places and discover the palaces where the real old people are cooking food and you’ll be amazed.

Matera is one of the top cities to visit in Italy and recently a lot of tourists are getting amazed by its rocks and beautiful places you can visit.

This is called the city of the stones and it is considered to be one of the first cities on the planet where the civilization started in prehistoric times.

In this article, I have talked about some of the most interesting things that you can visit and explore in Matera. Spending only one day in this place is not enough according to me even though for certain people 2 days would be better than not visiting at all.

The food in this region is absolutely great and if you are smart about it you can end up eating some great dishes for sure.

If you are in Matera for Christmas you will experience one of the most intense sense of Christmas in the world.

Here it looks like every little church and detail are absolutely fitting with the Christmas atmosphere. Something you don’t want to miss is the Presepi and the living Presepe show.

I hope that by now thanks to this guide of Matera you have some interest in visiting this enchanted place and that you will spend some time in this place. 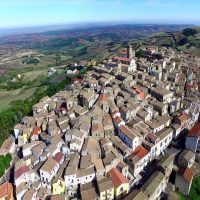